AED ZOLL PLUS VS NIHON KOHDEN 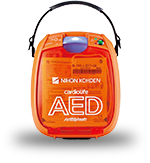 Specifications of
AED NIHON KOHDEN
(Made in Japan)

How to save a victim with AED Nihon Kohden 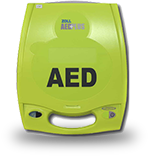 Specifications of
AED Zoll Plus
(Made in US)

How to save a victim with AED ZOLL Plus

ALSOK is the leading AED Authorized Distributor not only in Japan but also in Vietnam with wide range of Products, including Zoll Plus - US product and Nihon Kohden - Made-in-Japan.

One feature that really sets Zoll AED machine apart from other AED brands is its real-time feedback about the rate and depth CPR compression performance. This function relieves people without much experience or knowledge in CPR of worries about whether they are doing it well enough or not. The feedback will be issued by voice accompanied with visual instruction on an LCD sccreen built-in the AED machine.

For Non-English speakers, Nihon Kohden prevails Zoll as it offers users with voice instructions in up to 3 languages including Vietnamese, English and Japanese). Users can choose to use 2 of these 3 languages depending on their preferences: EN+VN,EN+JP,VN+JP.
Another feature worths noting is that Nihon Kohden AED can be applied used for both children and adults without needing to change the electrical pads, which makes it super convenient and easy to use.

Where AED should be placed?

First and foremost, It is strongly advised that AED be placed in Swimming pools, Gymnasiums, hotels, soccer field , factories or other sport venues in which physical activities with high intesity are taken place regularly since drowning and other incidents that lead to cardiac arrest might happen anytime.

AEDs are also highly recommended for other public sites such as shopping centers, office buildings, hotels, schools, factories as sudden cardiac arrest might happen to anyone at anytime and in any places.

Schools, shopping centers, office buildings, factories, ... are places that AED should be placed as well

By and large, both public and private venues, at which there is a large number of people or people are at high risk for cardio arrest or heart attack need to be equipped with AED. 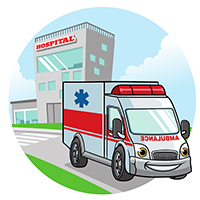 (Japantimes, 2002) informed the death cause of Japanese Prince TAKAMADO in 2002, when he was playing Squash at the Canadian Embassy, aged 47. “Immediately after the prince's collapse, a Canadian official phoned for an ambulance and the prince was rushed to Keio University Hospital in Shinjuku Ward”. Tradically, miracle did not happen in the end. Since then, AED has been known as Legal Nationwide Public-Access Defibrillator in Japan since 2004.

They are pioneers in using AED for risk prevention in Vietnam.
Besides, CPR and AED training course is conducted freely on the delivery day at the Customer site.
ALSOK Vietnam has been conducting training Program for more than 6,000 staffs and International Senior Managers.

In conclusion, Nihon Kohden would be ideal choice in Vietnam choice for Vietnamese consumers.

Besides, you might decide to set up bilingual languages with English or Japanese as well. Hotels and Shopping malls or schools are adviced to be eqipped with Nihon Kohden which is pad is applicable for both Children and Adult.

However, for places with many English-speakers, foreigners or people who have concern about how to properly perform CPR (chest compressions + breaths), ZOLL seems like a better choice.